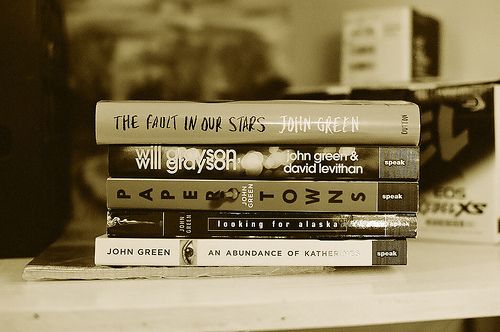 I already had the revelation that John Green is a phenomenal writer after reading The Fault in Our Stars (TFIOS). It was a book that transformed my worldview and gave me a new perspective on life. Deep. I know.

An Abundance of Katherines (AAOK) was the second book that I read by John Green. A refreshing, contemporary take on the youth, I was captivated by the plot from the instant I started reading it.

I have to admit. After reading TFIOS, I had a preconception that all of John Green’s books would absorb emotionally captivating stories that deliver valuable messages about love and life to its readers. I was wrong in this regard but I don’t know if that makes me happy or a little sad.

AAOK tells the story of Colin Singleton – a former child prodigy that has a knack and competency for anagramming, a love for Katherines and an outspoken fear that he won’t be able to make his mark on the world one day. The other central characters – Hassan and Lindsey in particular – are eccentric to the unfolding of the plot. A plot which – at the outset – doesn’t appear as simple as it eventually turns out to be.

AAOK is a light-hearted, witty book that revolves Colin’s search for a ‘Eureka’ moment on a road-trip that he decides to take with his best friend Hassan, following his break-up with his (now ex) girlfriend Katherine-19.

After reading the blurb, I was actually quite excited about this road trip that could potentially consist of an assortment of places, people and experiences that Colin would encounter. But from the moment that Colin and Hassan decided to stay in Gutshot, something in me died a little. It’s not that I was expecting a travel book that told an enchanting tale of Colin’s life-changing expedition and ended with his noble-prize-winning Eureka moment, preceded by the return of K-19. I mean, it’s a youth novel. It’s bound to be naive and a little humorous. But I did await a more riveting climax, one that sent the essence of a valuable message, or a moral, or something, anything.

Instead what I landed up with was a palpable truth – the future is unpredictable.

Perhaps I felt a little old reading this book as it reflected the fears, emotions and realities of teenagers rather than young adults. As teenagers, we often contest over the vast possibilities that exist in the future and whether we will ever make it (in the grand way that we want to). As young adults, we struggle to create a place for ourselves and remain sane in the never-ending cycle of work, eat, sleep and repeat.

Nevertheless, AAOK was an entertaining book. The language was clear and concise, even on occasions when a potential genius like Colin was speaking, but it didn’t falter the portrayal of his intelligence in any way. And that is the tact of John Green’s ability to write so well. It was quirky, fun and light-hearted throughout.  It told an enjoyable story. Often, I couldn’t help but smile at the naivety and innocence of the central characters. And even though Colin was supposed to be this studious, hard-working young boy with the potential of a genius, I felt that his personality was a realisation of the inner-most fears that cap the minds of youngsters; the fear of mattering, of making something of ourselves, of being extraordinary but at the same time, of fitting in.

All of these fears were manifest in Colin and are relatable to most young readers in the contemporary world.

This is definitely a must-read for those who enjoy books that they can breeze through, feeling enlivened and relaxed in the end.